"We Have Our Slate; the Fight Starts Now!"

Houston Rally Will Call Out NRA, GOP for Responsibility in Gun Deaths

Houston Rally Will Call Out NRA, GOP for Responsibility in Gun Deaths

‘Republican Leaders Have Chosen Not to Make the Safety of Their Constituents Their No. 1 Priority,’ Says HCDP Chair 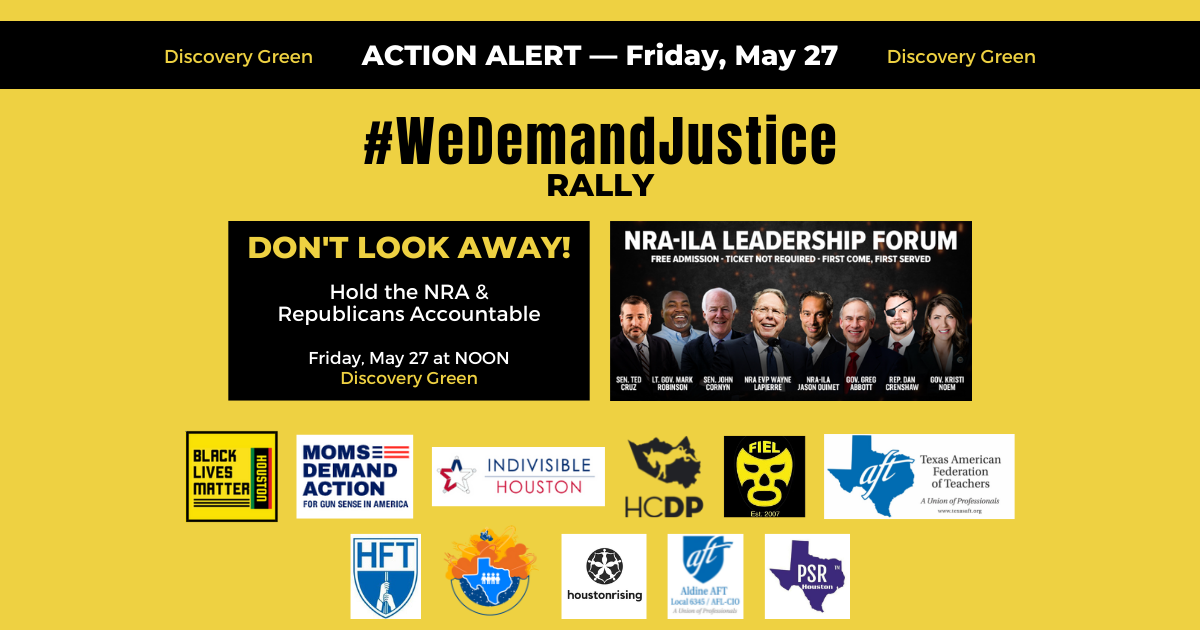 Houston — Individuals from across Texas are mobilizing for a rally in Houston on Friday to demand “swift and strong action” against the gun violence that continues to devastate our neighborhoods, schools and families.

The “Don’t Look Away” event is timed to coincide with the National Rifle Association's annual member meeting, which takes place in Houston this weekend.

“The NRA and Republican leaders like Gregg Abbott and Ted Cruz continue to obstruct the passage of laws restricting gun ownership in any way,” Evbagharu said. “They choose to ignore the fact that the majority of Americans favor tougher gun laws.

“While Texas is grieving from the mass shooting in Uvalde, the NRA and Republican leaders are going to meet to celebrate America’s unhindered and unregulated access to guns — access that is destroying lives.

“At the Don’t Look Away Rally, we are calling out both the NRA and our Republican leaders for continuing to champion lax gun laws — all for political and financial gain.

“We are aggressively pushing for gun reforms that would save lives, and we are calling for swift and strong action to address the continued surge in gun violence across the country.

“Republican leaders have chosen not to make the safety of their constituents their No. 1 priority, and we are gathering to loudly and clearly tell them: In November we will be voting for leaders who put their constituents' safety first.

“We must do everything we can to prevent another gut-wrenching tragedy like the one in Uvalde,” Evbagharu said.

The “Don’t Look Away” rally will take place from noon to 3 PM on Friday, May 27, at Discovery Green in Houston. More information here.